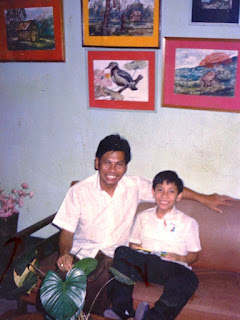 Tonyo, aka my Dad, returned to Our Creator this morning.

Mommy was by his side.

Bye, Tonyo. Thank you for everything.
Posted by Clayman at 12:00 AM 1 comment: 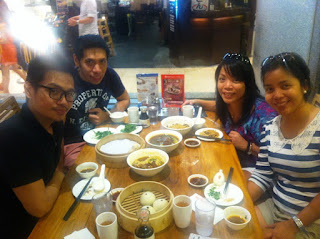 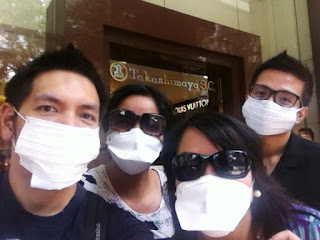 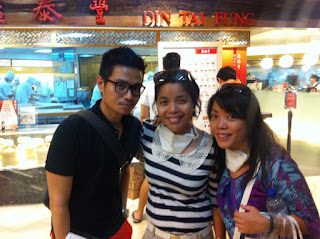 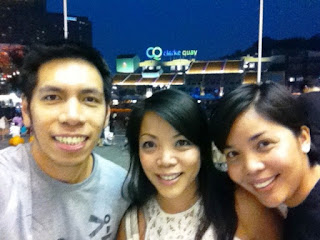 Despite the haze that choked the whole island for days, the week still ended on a good note because of visiting friends.

Sisters Arlyn and Ryse, who I both met through my best friend Tey, were in town for a holiday. It was Arlyn's first trip to Singapore (surprisingly). I wasn't able to ask Ryse if it was the same thing for her.

It's always a happy moment for me whenever friends from Manila come and visit. Aside from the catchup, it is also an opportunity to play tour guide to friends.

Hmm, personally, I'd like to show friends the not-so-touristy parts of the island. I know that Orchard, the Esplanade and Merlion Park, Bugis, to name a few, are mandatory places to visits.

But if possible, and that is if visiting friends are interested and they have the time, I'd bring them to Bukit Timah Nature Reserve, or cafe' hopping at Tiong Bahru, or even cycling at Pulau Ubin just to see another side of the island-state. It's not really Singa-bore.

Thankfully, the air quality improved somehow by Friday night and we were able to do a bit of both.

Originally, Arlyn and Ryse wanted to try chilli crabs and cereal prawns. No Signboard or Jumbo Seafood could have easily been an option. Instead, I suggested instead we go to the chilli crab place in Ghim Moh.

However, because of the PSI readings that day, it was better that we dine indoors. We sacrificed the chilli crab and just went for the cereal prawns (and coffee pork ribs, ngor hiong, and fried rice! Hehe!). I brought them to Le Chasseur, which was right across Central, and is one of the nicer zi char places.

Afterwards, I was ready to go to Clarke Quay, which is really not my fave place and is not my scene for obvious reasons (hehe), but I know it's a must-visit for tourists.

Instead, we ended going to Club St. in Ann Siang Hill since Ryse's SG-based friend was there. I forgot about that area as a (better) alternative to Clarke Quay (again because it is not my scene). Hehe!

We took the bus from Central and had to walk a bit to Club St., but it was also an opportunity to show Chinatown, Maxwell area, Neil Road(!) to the sisters before leaving them at Club St. with Ryse's friend.

Saturday, I met up again with the sisters. PG Boy had class and I didn't have anything scheduled so I was able to hang out with them before they leave for Manila. (I was tentatively scheduled to play museum tour guide to Tipz's folks, but they had other plans, I think. Hehe!) Simon, a common friend who's SG-based as well, joined us, too.

That day, we did the touristy activities, which was still fun. We started the afternoon by shopping at H&M, followed by a long, good lunch at Din Tai Fung in Paragon, and then going to Ion for more shopping for them.

Simon and I agreed that it was a short visit. There were still more to do, more to see. Hehe! Arlyn and Ryse said they will be back when friend Rej visits from Dubai and when JoAnn gives birth months from now. Yay!

This coming weekend will also be a busy and happy one because another two friends - I-van and Moi -are flying in.
Posted by Clayman at 10:56 AM 2 comments: 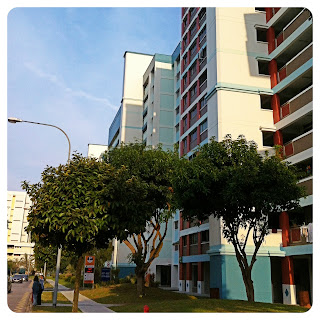 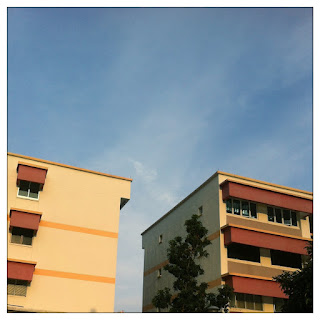 After a week or so of unhealthy air, even hazardous on certain days, the island finally saw some clear blue skies today.

I would say "thank heavens," but I dunno if it would be right because the haze problem is not yet really over. Malaysia is the one bearing the brunt at the moment. Several Indonesian towns are also severely affected. The clear skies today are just a result of the change in wind direction.

Until the forest fires in Sumatra are put out, then there may be a chance for the haze to return to the island.

That's why it's good to still have the N95 masks ready. Better to be prepared. Thanks mucho to MkSurf8 for bringing masks all the way from Manila. 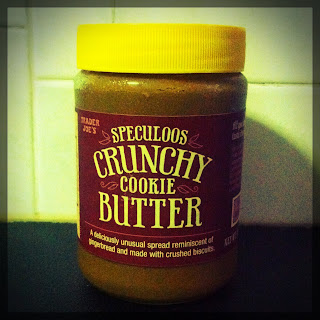 Now, I'll get to find out what all the fuss about this jar is. Hehe!

The air that I breathe... 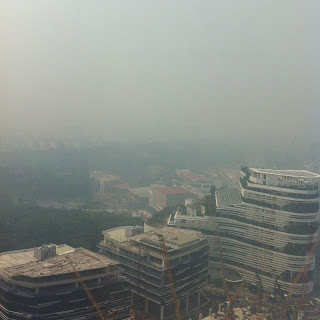 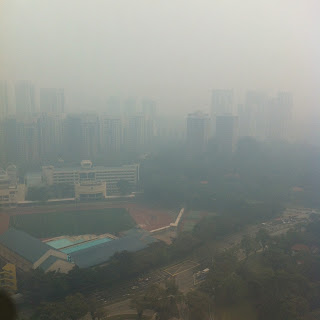 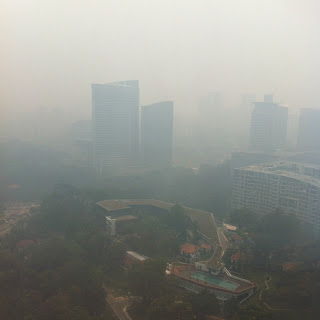 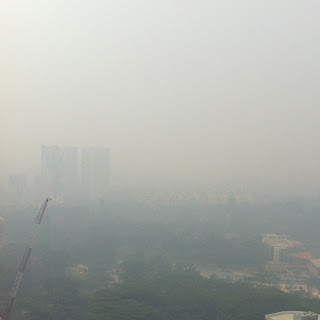 The haze today brought about by the forest fires and kaingin in Sumatra has got to be the worst.

Above are photos I took from the 23rd storey of Fusionopolis over lunch time.

How crazy is that haze, huh?

On a clear day, I usually see MBS and the skyscrapers of CBD while I do Combat or Pump?

And I've just read that as of 2PM, the PSI reading was already 170.

Too many things have been happening since I last blogged.

That's the reason why I haven't had the time to write a proper post.

Must make time for it this week.
Posted by Clayman at 8:59 AM No comments: 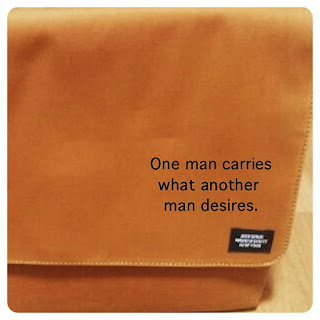 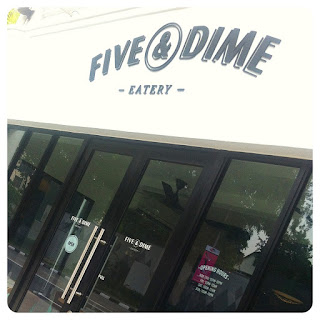 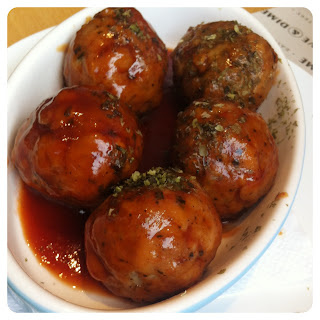 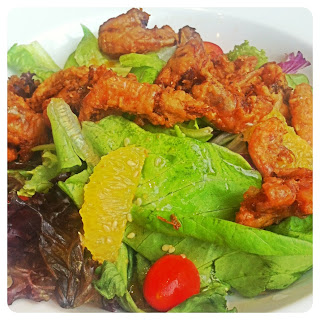 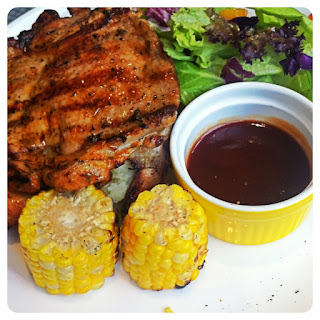 A food shot by an IG friend of what he ordered at Five & Dime got me interested to try out the place.

I told PG Boy about the place and we agreed that we should go try it out.

Our first attempt was a fail. Haha! It was a Friday. It was drizzling. There was a mad jam. And neither of us had any idea how to get to the place, even with the guidance of GoThere. (Or actually, it was just the thought of having to be stuck in a jam or walking an unknown distance under the rain that made us decide to ditch the plan. Hehe!).

Our second try was successful but with a minor glitch. Hehe!

After finishing my session at the museum, PG Boy and I were WhatsApping on where to meet. He was at the Orchard area. I was in a bus coming from Bras Basah. It was only past five and that's when it occurred to me that we should go search for Five & Dime. We agreed to meet at Somerset and from there, we followed the directions to 297 River Valley given by Google Maps.

Five & Dime was easy to locate, too. It was right next to a bus stop and a row of beautiful old shophouse style.

The first thing that we were asked when we entered was whether we had a reservation. That's when I saw that all the tables had namecard. LOL! Why did it not occur to me that a reservation was needed? However, the guy who attended to us checked his schedules and told us he can give us a table but we had to leave by seven thirty. We were both okay with it since we just wanted to have dinner and then head somewhere else for dessert.

After getting our table, I took a look around the place. It was easy to understand why the cafe/eatery has been such a hit. The setup was very nice. I really liked the decor of the place. Cafes in Singapore have been doing a good job in creating a unique feel and ambience giving customers several options. If you want a setting that's industrial, go to Chye Seng Huat. If you want a garden setting, go to PS Cafe at Dempsey. If you want something modern and cosmopolitan, go to Wild Honey at either Scotts Square or Mandarin Gallery. That's one thing I really like about the cafes here.

Back to Five & Dime, the food was also quite enjoyable. For starters, we ordered homemade meatballs. It was about $8 for five pieces. Not bad at all. I even daresay it tastes better than the one served in Ikea. Then we shared a salad and grilled chicken. It was quite filling and we both enjoyed the food. Uhm, I would have wanted steamed corn on the cob but that's just a personal preference.

Overall, I would still say that the first Five & Dime experience is enough to get me to want to go back and try it again. The service was also quite good. There was this one girl, whose name I forgot to get, but she was really good. She paid attention to diners and was ready to assist. Also, on the next visit, I would like to try the brunch. I've been reading quite good revs about it. 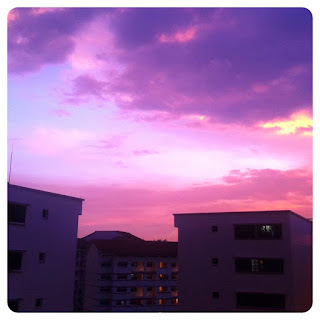 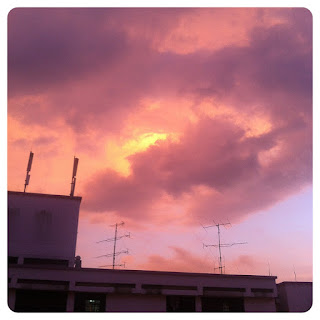 There are a few things I'd like to write about but I haven't had the time to sit down and compose my entries. Hehe!

Anyway, I thought I'd post two photos of the sky that I took yesterday as I was about to enter my flat.

As I was looking for my keys, I looked up and just saw how beautiful the colors of the sky were. Does that sound weird? Hehe!

Next thing you know, I already had my iPhone on my hand and taking photos of the wonderful sky.

No filters needed as the colors were already very much alive and vivid.

I think now I understand why cloud appreciations group exist. Hehe!
Posted by Clayman at 10:59 AM No comments: