I went to dinner last Saturday.

He's a nice guy. He's cute. He has a decent job. He can speak English. He also adjusted his speed of speech and used simple words when he spoke to me in Japanese.

And he was late. He was thirty minutes late.

Of course, I was annoyed. Whether it is because of age or because I stereotype (I think all Japanese people are punctual!), I have not idea. I was just annoyed. Lol.

We originally agreed to have dinner at a restaurant a stone's throw away from Tokyo Station. In the end, I made an executive decision and told him to just meet me at Tokyo Station.

It was rather a stupid decision because first, restaus at the station are almost always crowded and second, it's a bit pricey. ¥600 for ハイボール?!?! You've got to be kidding me! Haha!

It was an enjoyable time though.

The following day, I messaged him to say hello. He didn't reply anymore. He replied today with a simple "Hi." but I'm taking it as a sign that he's not interested.

I had a busy morning. All five lessons were booked. After that, I headed to Shinjuku for my private lesson.

In the afternoon, I headed home and just relaxed. I had no taiko practice tonight so I was able to chillax.

I got to go for a run around my neighborhood. I did my laundry, and so on. Hehe!

I still need a proper holiday though. Haha!
Posted by Clayman at 9:03 PM 1 comment:

Today was a really slow day.

Again, I'm guessing it has something to do with the oliday.

No worries. I didn't stress over it because seriously, what can I do? There's a phrase the Japanese use for such situations. Shouganai (しょうがない) means "It can't be helped" or "Nothing can be done"

With several breaks in between my lessons, I decided to head to the nearby Maruzen and do something I had not done in such a long time - buy a paperback. Lol. I've been so used to reading via Kindle so I dunno why I decided to get a paperback again.

I got Liane Moriarty's Big Little Lies. I enjoyed the HBO miniseries very much so I'm curious to read the book.

Perhaps because I was in love with the miniseries. I dunno. Haha!
Posted by Clayman at 9:08 PM No comments:

Today is a holiday - Mountain Day

It's a new holiday. It started last year and it's meant to celebrate all things mountain-related in Japan.

I decided to work in another learning studio. Initially, I had three lessons but I guess the students decided to go on a holiday instead. Lol. So, I was down to just one lesson today. It was okay. After my one lesson, I headed to a nearby cafe to work on my semi-sideline job.

After that, I headed home to take a nap.

At 3:45, I left the house and took the train to Nippori to meet up with housemate Shuto. It was his birthday last week and I told I'd buy him dinner. Before going to dinner, I told him I'd like to check out Yanaka.

The place was actually interesting. There was a street called Yanaka Ginza, which was lined with many interesting shops. There were a million cafes. I definitely want to go back and check out the place again.

On top of the cafes, there were a number of cultural places. However, I didn't take any photos because the sky was gloomy. The photos wouldn't look nice. Haha!

From Yanaka, we walked to Ueno and headed to a tonkatsu restaurant. It's the restau where Dean brought me a year ago. I should take more of my visiting friends to that place. The only downside is that you smell like oil when you step out of the restau. Haha! We also went to an izakaya where we had a couple of drinks and had some kushiage. Nice nice!
Posted by Clayman at 11:07 PM No comments:

Labels: clayman79 in Tokyo, foreign worker in Tokyo, UP Boy in Tokyo

What a tiring day.

Thursday is my half day off but the work just never ends. Lol.

After my morning lessons, I headed to Nishi-Shinjuku to give a private lessons.

Then, I had to go all the way to Tateishi because I needed to sort something at the Ward Office. I was told that I needed to go to another office. Lol!

Hmm, with my very limited Japanese, I was able to sort things out. Thank goodness.

Then, I went home. Now, I'm waiting for my laundry to be done.

After that, I'll go to the coin laundry to use the dryer.

In the evening, I'm heading to Kuramae for taiko practice.

Thankfully, tomorrow is a public holiday. I originally had three lessons, but the other two lessons were canceled.
Posted by Clayman at 4:26 PM 1 comment: 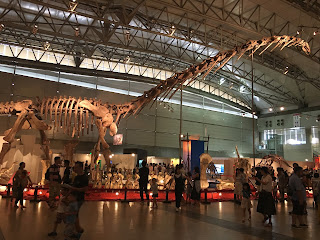 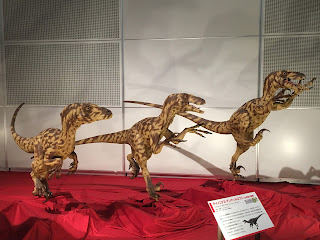 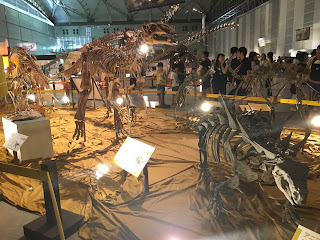 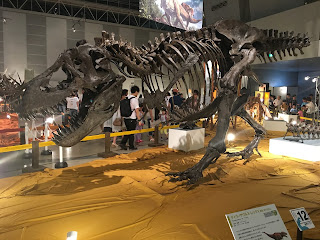 Last Sunday, I went to Makuhari Messe in faraway Chiba to check out the Giga 2017 exhibit.

I had no other plans and I was done with my work so I had free time.

The exhibit was okay. I thought it was more interesting for the kids, rather than adults.

Perhaps I was expecting something more in terms of the exhibit's layout and set design. I remember going to a similar exhibit in Singapore and I was floored by the setup.

So, I kinda hoped this one was going to be just as exciting if not more.

Oh well, it was still a good visit to faraway Chiba. Plus, I now know that there's an outlet store in Chiba that I can visit. Haha!
Posted by Clayman at 1:43 PM 1 comment:

Curent earworm.
Posted by Clayman at 9:49 PM No comments:

For some reason, I usually get up at 2 or 3AM to go to the toilet to pee.

This morning was no different. The only difference was when I went back to bed, the ground started moving. I thought I was dreaming. It only lasted a few seconds, but it was strong.

When I got to work this morning, I overheard one of my coworkers ask another coworker if they felt the earthquake. So, apparently it was true. Lol.

While I was having my first lesson, the building's earthquake alarm went off. My student was unperturbed by the whole thing so I guess there was no need for me to be worried. Lol!

Time is flying so fast! It's insane. Okay, I'll try to post more often. Lol. The operative word being "try."

Last Sunday, I went on a date. Or I thought it was a date.

Recently, I usually just meet with people for one hour. I don't know if it's because I'm getting old or it's because I just don't see the need to spend more time than needed if I feel there's no follow through. Lol.

With this guy though, I dropped the one-hour rule because of a few good signs. He said he usually video calls with guys first before meeting up with them. He liked Rose Bakery, too. (Lol!) As soon as we started chatting, it just felt natural.

Long story short, it was a great Sunday. We had lunch, dinner, and coffee. We went to one of my favorite parks in Tokyo. We went to an onsen.

So, those were all good signs.

Yesterday, I messaged him to ask if he wanted to hang out again soon.

He said yeah but he also said he has a partner.

My reaction was WTF?!

This is the third time that this has happened to me. I refuse to think it's a Japanese thing. (The other two instances were with Japanese guys, too. Lol!) Lying by omission is still lying, I think.

Oh well. I just kinda felt sad because I spent 8 hours with the guy and it was a good date. You don't get that often, right?