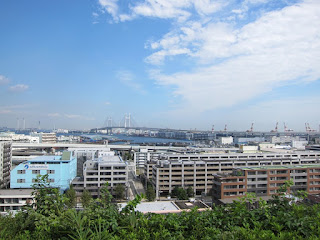 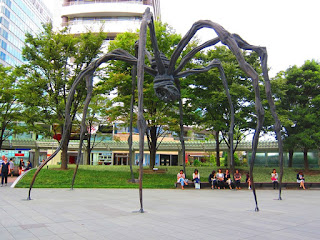 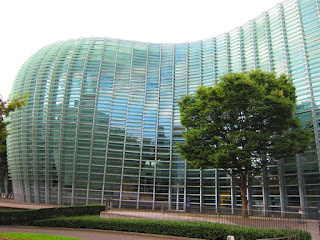 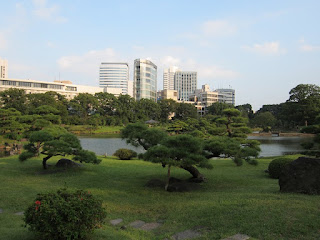 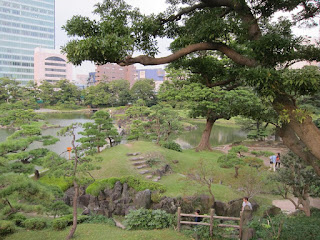 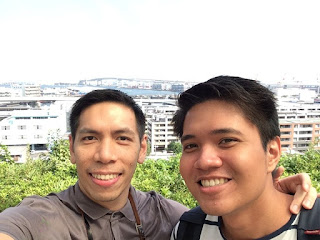 Sunday morning, I traveled from Higashi-jujo station north of Tokyo to Ishikawacho station in the south. Dean suggested attending Mass at the Church of Sacred Heart. I realised that there was no need to Google Maps the church from the train station. I heard a few groups of people speaking Tagalog. All I did was just follow them and yes, I made it to church on time. Hah!

After Mass, I met up with Dean and we went for a walk around the neighbourhood of Yamate. The architecture of the houses are so different from the ones I saw in Kawagoe. From the design of the houses, one can already learn a bit of the history of the place. From what I read, it was where the Western traders after the Japanese ports opened in the 1850s. The hilly area was perfect because it gave a great view of the sea. The leisurely walk around the neighbourhood also doubles as an architectural heritage walk. Dean and I checked out the Ehrismann Residence, which I read is a registered historical building of Yokohama. The house was built in the 1920s and served as a residence of a Swiss businessman designed by a Czech architect. Today, there is a cafe at the ground floor, while the rest of the house is open for a visit. It was like visiting the ancestral houses in Iloilo or Negros. Hehe!

Further walking and we reached Harbor View Park, which offers a splendid panoramic view of Yokohama port. Apparently, the site used to be a British soldiers' barracks. It would be awesome to see at night. If I didn't have an itinerary, I would have spent more time to check out the shopping lane called Motomachi.

From the south, I traveled to Roppongi. My first stop was the Mori Tower to check out the Louise Bourgeois spider sculpture "Maman." I don't think Kok Kuan will want to see it though. From there, I walked towards the National Art Center. Unlike its sisters such as the National Museum of Modern Art, the National Art Center does not maintain a permanent collection. Instead, the center serves as a venue for various art exhibitions. I was curious to see an Issey Miyake exhibit but it was scheduled in early 2016. I wasn't too keen on the ongoing exhibits but I did enjoy exploring the center.

Kyu Shiba Rikyu (Former Shiba Villa) was the first Japanese garden I visited during the trip. It would also be the place to ignite my fascination and admiration for Japanese gardens. Right in the heart of central Tokyo, located just next to Hamamatsucho Station, the Kyu Shiba Rikyu was an escape from the chaos of the city. For a very minimal entry fee of 150 yen, I was able to visit one of the two surviving feudal era clan gardens in Tokyo. The gardens has a rich history dating back to the 1800s. It was only opened to the public in 1924.

It was easy to fall in love with the garden. From different points of view, there is always a scenic perspective to be seen. Once in a while, I would hear the sound of the shinkansen but it was not loud enough to distract me from appreciating the beauty of the place. I took a long time just walking and enjoying the garden that I reached my next destination a bit late. Lol!

I left the gardens and walked for about 15 minutes or so before reaching Zozoji Temple and eventually, Tokyo Tower. The former is the head temple of a certain Buddhist sect. The temple has a number of interesting features but I did not have time to explore them anymore as they were already closed. I just took a few photos and then continued walking to Tokyo Tower.

Before the Tokyo Skytree was erected, Tokyo Tower was the tallest structure in Japan. I only went for the main observatory and just as I expected, interesting views of the city can be seen. I waited for nighttime just to see the buildings lit up.
Posted by Clayman at 9:00 AM

Labels: UP Boy in Japan, UP Boy travels