Short trail in my backyard discovered... 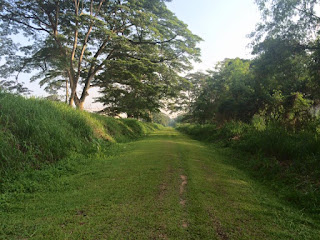 I went for a walk this morning. I haven't started running again because I want to be kind to my knees for now. Lol.

Hence, I decided that I'll just go for a walk. Initially, my plan was just to go for a one hour walk. I had a route in my mind. When I stepped out of the house, I decided I'll do a different route instead since I won't be running.

That different route led me to a short trail which was just near my neighbourhood. However, as I reached the end of the trail, I realised that I was actually a bit far off and I ended up in the industrial area of Kranji. Hahaha! It was okay though because I still managed to find my way back. And now, I know that instead of going straight I just need to do a U-turn.

Because I got lost, I ended up walking an extra 2K and an extra 30 minutes. Haha! Good exercise for today though.