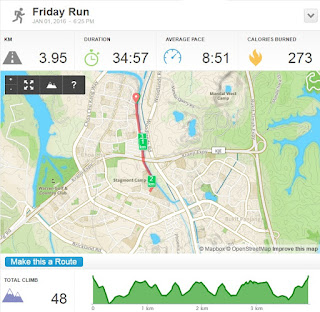 After welcoming 2016 at Mon and Richie's place, I got back a little after 1AM. Thankfully, the MRT service was extended last night. I didn't have to shell out for cab fare. Yay! As soon as I got home, I took a rest for a few minutes before taking a shower and then hitting the sack.

Though I slept really late, I still got up at 7AM. Haha! That was fine because I managed to do my laundry. While the clothes were in the washing machine, I stepped out for a bit to grab a light breakfast. As expected, not many people were up yet. I managed to have a quiet breakfast.

Since the clothes were not done yet, I turned on my computer first and started working on an online course I signed up for. I thought I'll keep myself even more productive but taking up some online course related to languages. It's not as easy as I thought. Haha, I've been spending an hour or two everyday on the course. This is because I want to complete it by next week.

Done with my study time and done with hanging the clothes, I took a short nap again before heading out. Mon and Richie invited to lunch today since Tita was preparing pancit and meatballs. On the way, I picked up some flowers for Tita and for Mon and Richie's house. I keep on asking them what I can bring. They keep on saying I don't need to bring anything. Lol. So, flowers it is.

The rest of the afternoon was spent relaxing at home. After lunch and some chitchat, I said buhbye to Tita, Mon and Richie as I'm sure they also want to rest.

To end the day, I went out for a short light run. It was more of a jog. My left knee is making me paranoid. I had an X-Ray last week but the results came out normal. However, I still feel a certain sensation when I do lunges. Other than that, it is fine. I feel no pain whatsoever. I wonder if I should go for an MRI. Ugh! I'll continue to monitor it. In the meantime, I have not been doing Body Pump, which I terribly miss. I am, however, back to yoga. Last week, I attended a vinyasa class and man, it was tough! I was sweating during the class and it was not even a Hot Flow class. To end my run today, I did some post-run yoga poses and ended with a guided meditation for savasana. Thank goodness for Youtube. Haha.

The last thing I am doing for today is to study for my National Gallery tour tomorrow and for Sunday. Tomorrow and Sunday have to be a lot better than my first one last week. Haha!