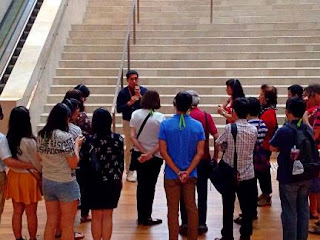 Today felt like a Sunday even though it's only Saturday.

The day turned out to be quite fruitful and I'm happy about it.

In the morning, I went to the gym to attend Vinyasa class. The teacher for the class I attended is one of my favorites. Since I have not been practicing, it was a challenge. I could do certain poses but I definitely still have a long way to go. It was a good workout though since I sweat it out. The left knee survived although it doesn't feel as strong as my right leg. For the meantime, I think I will be doing less Pump and more yoga classes, Body Balance. On the side, I'll do the weights. On off days, I'm thinking I can do short, light jogs.

After gym, I passed by the kopitiam for a quick brunch. Then, I headed back home to change my clothes.

The afternoon agenda was a guided tour at the National Gallery. Today was the second time I led a group around the Singapore Gallery. And I must say that I did a lot better today than my maiden tour last week. I felt I was more confident today. I felt I knew the gallery better. I adjusted my tour - I dropped some of the artworks that I talked about previously and I added some of the other art works that are closer to my heart. Of course, what also made the tour more enjoyable and twice as fun was the group itself. I led a group of 20 people - Singaporeans, Americans, Japanese. Several members of the group were responsive to my questions and many were willing to share their thoughts about the painting.

I was smiling on the inside when I saw several heads nodding in agreement, when there were smiles on some of the faces, and of course, when they applauded at the end of the tour. The other proof I have that the tour went well was that I took almost an hour and a half to finish the tour. Last week, I completed the tour in under an hour. Today, it was much better. I should however learn to stick to the 60 minute or so tour time since another group will need the headsets that we used. Oh, there was also one guy who walked up to me after the tour and told me that he had also previously attended my guided tour at the National Museum. I really appreciated the kind words he and a number of other guests gave.

Anyway, I was happy with how the tour went today. Round 2 of tours tomorrow. ;)

I left the gallery and walked to nearby Funan where I grabbed a late lunch at Subway. Thinking that it was part of the $5 meal, I ordered the Italian BMT. Ugh! It turned out that it wasn't and I paid more than what I wanted. Haha!

The last stop was the National Library. It wasn't as crowded and I easily found a study space. Spent a few hours at the library before packing up my stuff and heading back home.

Now, I'm just taking a break and then I'll study again for an hour before calling it a day... a long day.